Helen of Troy may have had the ‘face that launched a thousand ships’ but Hazel Lavery’s launched a billion pounds!

Hazel Lavery (nee Martyn) was born on 14th March 1880 in Chicago to Edward Martyn, a wealthy industrialist of Anglo-Irish extraction. She was known as ‘The Most Beautiful Girl in the Midwest’ but decided to leave and went to London in the early 1900s. She married a doctor, Edward Trudeau in 1903, but he died after only five months. By then she had met John Lavery, and they married in 1909. He was the most sought-after artist in London and was appointed the official artist to the British Government during World War I. When he was knighted in 1918 Hazel became Lady Lavery.

As Sir John Lavery was the portrait artist of choice for the ‘great and good’ in London, Hazel met and corresponded with many famous people like George Bernard Shaw, the historian Hilaire Belloc and Lytton Strachey, a founding member of the Bloomsday Group. During the Anglo-Irish treaty negotiations in 1922 their grand house on Cromwell Parade, South Kensington, was used by the Irish delegation. Hazel was very much the society hostess and entertained her guests that included Michael Collins and Kevin O’Higgins. At the time there was much gossip and speculation about her relationship with these men, but her correspondence does not confirm anything. 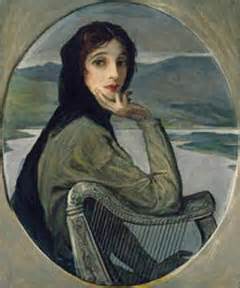 After the Treaty was signed Sir John Lavery was asked to design an image for the new Irish Banknotes that represented the female personification of Ireland. This looked back to Irish mythology and had been previously represented by Mangan’s Dark Rosaleen and WB Yeats’ Cathleen Ni Houlihan. Hazel’s image was adopted and reproduced on banknotes from 1928 until the mid-1970s. And that’s an awful lot of banknotes (and money). 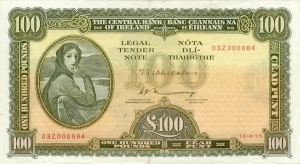 Lady Lavery – on the money!