It is often said that ‘timing is everything’ and it certainly was the case when George Frideric Handel arrived in Dublin in November 1741. For he was carrying with him the work that was premiered five months later, and which forever ties the German composer and the city together.

The Duke of Devonshire, then Lord Lieutenant of Ireland, invited Handel, who was at the height of his power and popularity, to play a series of concerts. Matthew Dubourg, the Irish violinist and concertmaster, arranged and selected the musicians. Handel’s concerts between December 1741 and February 1742 were a great success, and he decided to perform a free concert (no fee charged) to raise money for three charities when he would perform Messiah. Handel’s collaborator and librettist Charles Jennens had written the oratorio in the July 1741. The composer completed the music, all 259 pages, in just 24 days between August and September. And, luckily for Dublin, did not perform it.

Dubourg arranged for singers from both Christ Church Cathedral and St Patrick’s Cathedral to take part and sing what would become the famous work,  Hallelujah.  Jonathan Swift, Dean of St Patrick’s, did not approve of their participation on the grounds that he disliked Messiah and preferred ‘A Sacred Oratorio’. He relented and, as they say ‘the rest is history’.

While in Dublin, Handel stayed in Lower Abbey Street and rehearsed much of the oratorio in St Michan’s Church. (The organ that he used is still in use.)   After the success of his earlier concerts there was a great demand for tickets, and over 700 patrons showed up at Neal’s Musick Hall, Fishamble Street on 13th April 1742. (Sadly, like so much ‘development’ carried out in the city over the centuries, the hall was badly treated and only the front arch of the original building remains.) Due to the expected crowding men were asked to ‘leave their swords at home, and women to refrain from wearing hoop skirts.’ It was a lively affair and in the words of one enthusiastic critic: ‘The sublime, the grand and the tender, adapted to the most elevated and moving words, conspired to transport and charm the ravished heart and ear.’  Handel was at the ‘top of his game’. 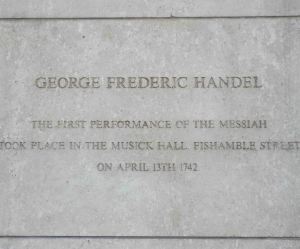 Handel led the performance and played the harpsichord, while Dubourg played violin and conducted the orchestra.And history was made. The oratorio was an immediate success, and Handel performed it again in July (for his own financial benefit) before returning to London. But what a leaving present he gave us. Hallelujah!