The Custom House – A Dublin Favourite

The Custom House is one of Dublin’s most important and beautiful buildings,  and the first major work designed by James Gandon. He was also responsible for such iconic buildings as the Four Courts, King’s Inns and the curved    screen and portico for the Irish Houses of Parliament facing College Street.

John Beresford, who was appointed the Commissioner for Revenue in Ireland in 1780, was determined to have the new building further east and away from the Parliament Street – Capel Street axis. This decision met with great resistance from merchants who felt that it would reduce trade and property values. Construction was halted by members of Dublin Corporation and the High Sheriff who led a demonstration of may thousand. Beresford, however, was determined to have the building situated on the newly reclaimed land on the north quays and appointed Thomas Cooley as architect. When he died suddenly, Beresford contacted Gandon who came from London and began work in 1781.

Work continued for ten years providing employment for the city’s carpenters and stonemasons, and was officially opened on 7th  November 1791. It cost £200,000, a huge sum at the time. The building is 375 feet in length and 205 feet in depth, and has four fronts, of which the south (facing the Liffey) is entirely of Portland stone, and the others of granite. The exterior is adorned with sculptures and coats-of-arms by Thomas Banks, Agnostino Carlini and Edward Smyth who carved a series of sculpted keystones symbolising the rivers of Ireland.

The building was destroyed in May 1921 during the Irish Civil when centuries of records were irrevocably lost. The dome, with the statue of Commerce  atop, was replaced using Ardbraccan limestone that is darker than the original Portland stone. Sadly, most of Gandon’s original interior that was destroyed was impossible to replace, but the building is still one of the city’s favourites. 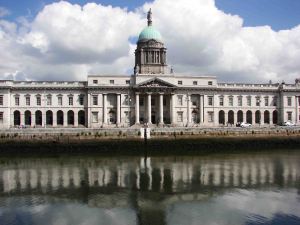