I don’t know how I had not managed to visit IMMA before, but I’m sure glad that I did. The place, although it concentrates on the Modern there is much history to learn. It’s a terrific place to visit, and I expect you’ll need a second one to ‘get it all in.’

The Irish Museum of Modern Art was established by the Government in 1990 as the first national institution for the collection and presentation of modern and contemporary art. It was opened officially by An Taoiseach, Charles Haughey, on 25th May 1991 and since then it has become an influential presence in both Irish and international art. It is recognised for its extensive and informative exhibitions that attract half-a-million visitors each year.

The site where the building stands has an interesting history. James Butler, Earl of Ormonde and Viceroy to King Charles II was granted permission to build a place for ‘old soldiers’. He was impressed with the building Les Invalides erected by France’s Louis XIV and selected William Robinson (he also designed Marsh’s Library) as the architect. The old hospital on the site that dated back to the days of Strongbow was removed, and the foundation stone was laid in 1680. The work was completed in four years and what you now see is Ireland’s best preserved 17th century building. Much work by the Office of Public Works (OPW) in the 1980s has really made the place ‘easy on the eye’, and it is no surprise they received a Europa Nostra in 1986. 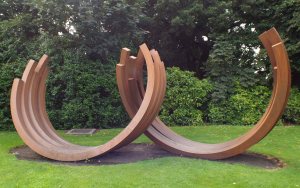 Art in the open air

Apart from the building you must visit the 18th century formal gardens. It was a treat walking past the neatly trimmed hedges, fountains and many, lovely statues. There are art works at different points around the grounds and you can always consider your next move the friendly restaurant. The mixture of ‘old and new’ works very well – it’s a delight. 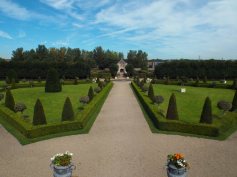