Time for Turner – The Vaughan Bequest

January is often viewed as a comedown after the excitement of Christmas has finally died away, but not for those who are fans of the watercolours of JMW Turner. The annual display of his work lasts for the month of January, and it is one of the National Gallery of Ireland’s (NGI) most popular attractions.

In 1900 the National Gallery were bequeathed 31 watercolours by Henry Vaughan, and a stipulation that they should only be displayed in January when the light was weak. This was to protect the delicate drawings, and although modern measures can adequately do the job the National Gallery adheres to Vaughan’s request. This adds to the display and allows the viewer to see Turner’s magical work as Vaughan or the artist would have enjoyed them.

Henry Vaughan was born in Southwark, south London, in April 1809 and his father, George, owned a very successful hat making business. And in 1829 when his father died Henry inherited the business and was an extremely wealthy young man. He had been privately educated, and his wealth allowed him to travel widely in Europe and begin his collection. This included many works and sketches by Michelangelo and Rembrandt and paintings by Reynolds, Flaxman and Constable. In fact, he presented Constable’s famous work the Hay Wain to the National Gallery (London) in 1886.

By that time he had become a friend of Turner’s and bought a considerable number of his works that would constitute a large part of the Vaughan Bequest. The works that the NGI acquired have since been added to and now there are 36 watercolours to enjoy. They show Turner’s mastery of light, and his skill in catching the fleeting moment that so impressed generations of aspiring artists. And, two hundred later they still have the power to move the viewer. It’ll be a great way to start the New Year – check it out. 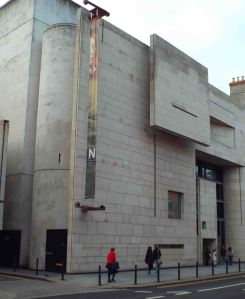