For those interested in animal history a visit to country’s oldest museum is not only a must but a real joy. The Zoological Museum was established in Trinity College nearly 250 years ago, and has more than 20,000 items. Some of the earliest donations came from wealthy collectors, and artifacts from Captain Cook’s expeditions in Australia and the South Sea Islands. You can see a platypus, kangaroo and a Tasmanian Tiger that has, sadly, been extinct since 1930.

There is something here for everyone, from the big to the tiny, from an elephant skeleton to trays of beautiful butterflies, and ‘live’ exhibits of worms, beetles and a rather large, hairy spider! Most of the items are in glass cabinets and there computer tablets where you can get information of what you are viewing. On the main counter you can see and touch a very impressive Rhino’s skull, elephant teeth, animal hides and the almost mystical narwhal tusk that was taller than my guide, Lauren. There are jaws of a Great White shark with rows of razor-sharp teeth. Even lying on the table, unmoving, they are a scary proposition. You can stick your head in (if you dare!) and have your photograph taken, and it’s as close I ever want to get to those choppers. 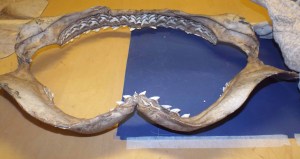 One of the best collections is that of the Blaschka Glass Models of marine invertebrates. These were made by Leopold and Rudolf Blaschka in Germany in the late 1800s and were used in schools and colleges as colourful, visual aids. And in the next cabinet is a replica skull of the Piltdown Man who was meant to be the ‘missing link’ between apes and man. This was later exposed as a hoax. 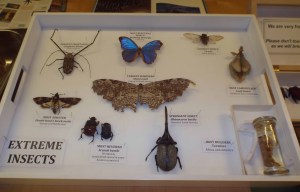 Engagement is the word to describe a visit to the museum that is open every day until August. There is a small fee, but then there is much to see and enjoy.

It is the oldest museum in Ireland and, until recently, a place that I had not known about. The Zoological Museum, in Trinity College, was established in 1777, although records show that there were collections of ‘natural history objects’ dating back almost a hundred years before. The museum was originally based in the Regent House and was established to house Polynesian artifacts from the South-Sea Islands, many of which had been brought back from the expeditions of Captain Cook. A new building was erected in 1876 to house the growing collection, but due to renovations and the demand for space the museum is now on the first floor. However, much of the collection is intact and it is a vital resource for students.

Over the years there has been a number of Curators with Whitley Stokes (founder of the Botanic Gardens and co-founder of Dublin Zoological Society) appointed in 1792, and Robert Ball in 1844. He was the most influential appointee and was responsible for amassing most of what the museum now holds. He also donated his own considerable collection. And in that same year, when it was declared extinct, the museum was presented with a specimen of Ireland’s Last Great Auk. This flightless bird, a relative of the puffin and razorbill, was hunted by man for its fine feathers. There are only a few specimens of this bird in museums today, and it is one of the most treasured items in the museum’s 25,000 piece collection.

The great thing about visiting the museum is that you can handle many of the items; like the long narwhal tusk; the skull of a rhino or piece together the skeleton of a monkey. And if you like (or dare!) you can have your photograph taken in the jaws of a giant shark. Now that’s different! From birds and butterflies to a royal elephant there is much to see and enjoy in this little museum. And, appropriately for a zoological institution, there is a rare Charles Darwin item in a glass case at the entrance. Don’t miss it. 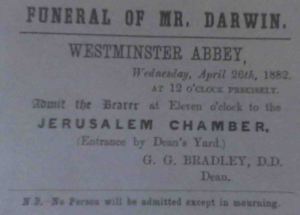