It’s that time of the year when Santa is busy going about meeting children, handing out presents and, most importantly, finding out what they want for Christmas. It’s a tough job and not one that Joey had ever thought of taking on, but circumstances sometimes demand action, no matter however unplanned or uncomfortable it seemed. It’s not a story of Christmas past, as such, but it certainly had some nervous moments.

Approaching Christmas, one of the things that the boys always looked forward to was the sale of work at the local girls’ school in Mount Anville. It was a great opportunity to buy small presents, have a laugh and of course, meet some girls. Such singular opportunities were important to boys who were keen to meet members of the fairer sex, and hopefully get a few invitations to parties over the festive season.

On a particularly cold and windy Saturday in early December Joey, Eddie and Paul, made their way to the school, and queued under swaying lights, chatting loudly. They were excited and quickly shuffled along to the door through which seasonal music and mirth drifted. A smell of warm apple-pie and fresh popcorn floated past, teasing and inviting, and they were eager to get inside.

The sports hall was decorated in a rainbow of colourful hangings and assorted lights. The place was alive with people of all ages pushing this way and that as White Christmas blasted out from a dodgy stereo system that had known better days. People who should have known better sung along as they moved about and checked out the bargains. There were stalls selling books, cakes, paintings and knitted gloves and scarves, as well as pottery pieces and other items that had been donated by some of the local shops. There was a hoopla stall where, even though you did not have to throw the hoop too far, it still seemed that nobody was winning very much. The boys tried their luck, but after a couple of fruitless attempts, moved on and eventually bought a few books and a big bag of hot popcorn.

As they were munching away, Eddie’s sister, Marie, ran over to them with a look of panic on her face. She had two friends with her and they all blurted out that they needed help – and that one of the boys was perfect for the job. Refusal was not an option. Santa Claus had taken ill, and a replacement was needed.

It seemed too silly for words, but the look of panic on the girls’ faces said that we collectively had an emergency, and that we were going to resolve it for them. The three boys were stunned and stopped munching and knew they were trapped – if they refused life would not be worth living. Gobsmacked, Joey looked at Eddie, who looked at Paul, but nobody said a word – this was emotional blackmail head-on.

Eddie coughed nervously and Paul looked at the floor as all about them people chatted and sang along to Peter Frampton’s ‘Show Me the Way’ on the crackling stereo.

‘I’ll do it,’ Joey said  a handful of popcorn still in his hand.

Eddie and Paul looked at him wide-eyed while the girls relaxed and took him by the arm through the noisy crowd to his place of destiny. It was actually a large broom cupboard at the back of the hall where all sorts of junk and smelly sports kit lived. How appropriate, he thought, and slipped off his jacket and scarf.

‘It’s really great that you’re doing this,’ said Marie breathing a huge sigh of relief. Margaret and Adrienne echoed her words as they smiled, again.

‘No problem,’ Joey replied, with no idea as to what he had let himself in for.

He was quickly dressed in a red Santa Claus suit, a few sizes too big, and after a few tricky and ticklish attempts, managed to keep the long white beard on. The girls showed him to an old, cracked leather chair on the side of the stage. He was ready.

First came a small girl who was unhappy at having to wait so long for the large, fat man dressed in an ill-fitting red suit. Joey explained that one of his reindeers, Rudolf, was not feeling too well as he had a runny nose. He said he was sorry and told her that her special wish would be granted on Christmas Day. Her mother took a photograph and Santa’s little helper, Margaret, smiled and gave the girl a present. Santa did this for the next hour or so, and after a sack full of wishes and promises to be good next year Joey was finished, literally!

Eddie and Paul had a good laugh at the Santa routine, but not as long as the one that Joey had over the following weeks.  Margaret was really impressed at what he had done. After talking together for a while at the end of the sale of work, she invited him to a party at her house over the holidays. And a few other parties as well. It was the best Christmas present he could have wished for, better than anything Santa Claus, in his ill-fitting red suit could have arranged. Ho, ho, ho! 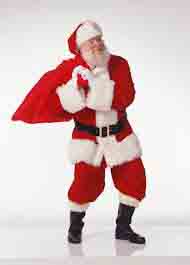