It is one of the most elegant bridges over the Liffey and was opened to pedestrian and horse-drawn traffic on 9th June 1829. It replaced a ferry service that had been operation for the previous hundred years and built to commemorate the visit of King George IV in August 1821. Daniel O’Connell was instrumental in raising funds for the bridge’s construction and the foundation stone was laid by the Marquis Wellesley on 12th December 1827. 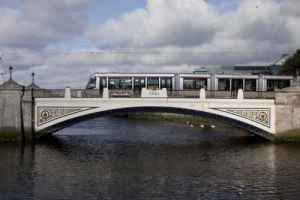 It was designed by the English architect George Papworth (who designed other buildings in Dublin including the interior of the Pro-Cathedral on Marlborough Street) and built in less than a year. It cost £13,000. The engineering work was carried out by Richard Robinson’s company Phoenix Iron Works, Parkgate Street, its proximity helping the speedy construction.

Papworth’s design was chosen by King George and over the years it became known as King’s Bridge. It stayed that way until 1922 when it was changed to Sarsfield Bridge in honour of the great 17th military commander who fought against the Williamites until he left for France and fought in the army of King Louis XIV. He was wounded at the Battle of Landen, Belgium, on the 19th August 1693, and died three days later in Huy, and is buried in the grounds of St Martin’s Church. A plaque on a wall marks his approximate burial site. As he lay dying with his blood trickling away he is quoted as saying ‘Oh, if only this were for Ireland’.

The bridge name was changed in 1941 to its present one in honour of the youngest man to be executed in the aftermath of the Easter Rising. He and his thirteen volunteers occupied the Mendicity Institution, close to King’s Bridge, and surrendered when besieged by superior forces. He was executed on 8th May and buried in Arbour Hill with other executed leaders.

Weight restrictions were introduced after a review in 1980 which led to the construction of the nearby Frank Sherwin Bridge in 1982. However, a major refurbishment was carried in 2001-02 that allowed it to carry the LUAS light rail system, with the first trams crossing the Liffey in 2004. The bridge, thankfully, is still open to pedestrians.

Jack B Yeats – A Portrait of the Artist

Jack B Yeats, one of Ireland’s foremost painters, was born in London on the 29 August 1871, the youngest child of John Butler Yeats and his wife Susan (nee Pollexfen). His father, who had trained as a lawyer, was also a painter although not nearly as successful as his son would become.

Jack spent his early years moving between London, Dublin and his maternal grandparent’s home in Sligo before moving to London in 1887. He studied at the South Kensington School of Art and the Chiswick School of Art where he met Mary Cottenham White who he married in 1894. They moved to Devon in where he developed his artistic career as an illustrator for various journals, and after focusing on watercolours had his first exhibition in London in the 1897.

The couple left Devon for Ireland in 1910, first settling in Greystones, Wicklow, before moving to Dublin and finally into 18 Fitzwilliam Square where they spent the rest of their lives.

Back in Dublin Yeats began to work in oils and travelled widely capturing images of rural life, particularly in the West of Ireland and, of course, scenes in Dublin. One of his most famous and beloved paintings is The Liffey Swim (1924) which is now in the National Gallery. He entered this in the Paris Olympics and won the Silver Medal which is part of the Jack B Yeats archive that was donated to the gallery by his niece Anne Yeats, herself a painter and stage designer, in 1996. In 1999, his painting The Wild Ones was sold at Sotheby’s, London, for £1.2 million, the highest price ever paid for one of his works.

He continued to produce work for publication including illustrations for JM Synge’s The Aran Islands. And he wrote numerous plays, a collection of short stories for children and novels through the 1930s and 1940s. He died on 28 March 1957 and is buried in Mount Jerome Cemetery. He was 85.