What a start to the year!

I must say that I was not expecting this, but I was certainly delighted to see it when I opened the envelope. The short story was published in LIANA, the quarterly magazine issued by Leopardstown Park Hospital, Dublin where my mother spent her last months. I am always happy to help the people there as they took great care of her and, having submitted a few stories, seeing this in the magazine is a real thrill, and a marvellous start to the year. 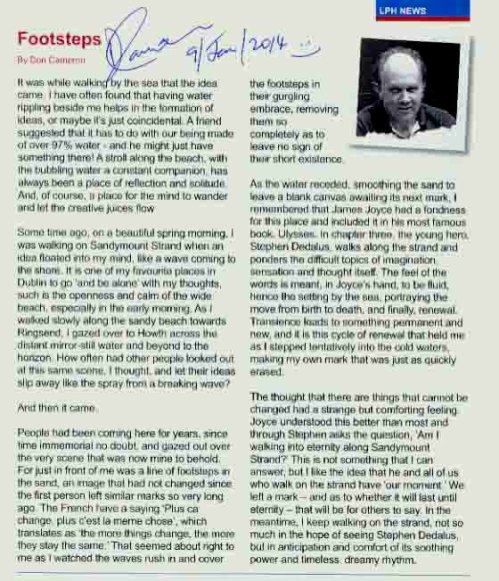 Night of the living Dead!

There are many ways to bring in the New Year, and celebrating James Joyce’s famous novella The Dead is a fine way indeed. The story takes place on the Feast of the Epiphany (Jan 6), and the gathering that was organised by the good folks of Sweny’s Pharmacy was memorable and true to the great man’s work.

The bar in the Teacher’s Club was thronged with excited diners who were dressed in period-style attire, men in dark suits and ladies in long, stylish dresses. Quite a few wore pretty hats, and there much netting on show. All were ready for the feast, and the large room was soon full and bubbling in excited anticipation. The room itself with its high, decorative ceiling, large gilded mirror, tall windows and subdued lighting was the perfect setting, something that even Joyce would have approved of. The dinner, in which the goose was cooked (wonderfully!) was sumptuous and led to much animated discussion. Unlike Mary Jane in the story who says’…when we are hungry we are all very quarrelsome,’ there was nothing like that heard as diners happily tucked into the tasty food. 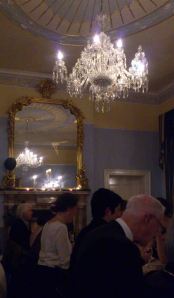 After dinner, with diners enjoying port and chocolates, the actor Shane Egan delivered a faithful rendering of  Gabriel Conroy’s speech which went down a treat. There were a few ‘Here, here,’ and ‘Well done,’ shouted out as he proceeded and nods of approval when he said ‘..not the first time that we have been recipients, or perhaps, I had better say, the victims, of the hospitality of certain good ladies.’ This got the biggest cheer, and we all realised that being a victim felt, well, really good!

After that the room was buzzing with noisy chatter as we waited for the evening’s entertainment to begin. The pianist introduced the singers who sang The Lass of Aughrim; Yes, Let Me Like a Soldier Fall, and many others to rapturous applause. I knew that Joyce had been an accomplished singer, but was completely unprepared for what one of my table guests said between songs. ‘Did you know that Joyce took singing lessons from a teacher, one Dr. Vincent O’Brien, in this very room.’ I and my fellow diners were gobsmacked. ‘And he immortalised O’Brien, by name, who conducts a large choir in the singing of the chorus from Handel’s Messiah, in the Circe episode in Ulysses.’  Well, how about that, I thought, as I turned around to take in the space where Joyce once sang. Now that was really something – an epiphany maybe – and a memorable start to the year. Cheers! 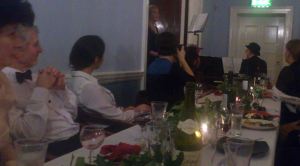