I don’t know how I had not managed to visit IMMA before, but I’m sure glad that I did. The place, although it concentrates on the Modern there is much history to learn. It’s a terrific place to visit, and I expect you’ll need a second one to ‘get it all in.’

The Irish Museum of Modern Art was established by the Government in 1990 as the first national institution for the collection and presentation of modern and contemporary art. It was opened officially by An Taoiseach, Charles Haughey, on 25th May 1991 and since then it has become an influential presence in both Irish and international art. It is recognised for its extensive and informative exhibitions that attract half-a-million visitors each year.

The site where the building stands has an interesting history. James Butler, Earl of Ormonde and Viceroy to King Charles II was granted permission to build a place for ‘old soldiers’. He was impressed with the building Les Invalides erected by France’s Louis XIV and selected William Robinson (he also designed Marsh’s Library) as the architect. The old hospital on the site that dated back to the days of Strongbow was removed, and the foundation stone was laid in 1680. The work was completed in four years and what you now see is Ireland’s best preserved 17th century building. Much work by the Office of Public Works (OPW) in the 1980s has really made the place ‘easy on the eye’, and it is no surprise they received a Europa Nostra in 1986.

Art in the open air

Apart from the building you must visit the 18th century formal gardens. It was a treat walking past the neatly trimmed hedges, fountains and many, lovely statues. There are art works at different points around the grounds and you can always consider your next move the friendly restaurant. The mixture of ‘old and new’ works very well – it’s a delight.

Pigeon House – Refuge from the storm 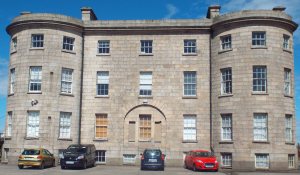 By the mid-1750s entry to and from Dublin Bay was a hazardous operation and the city governors decided something drastic needed to be done to improve the situation. So a plan was drawn up to construct a wall into the bay that would stop the silting up of channels and provide a safe place for passengers to board.

This work to build the Great South Wall took over thirty years and was complete in 1795 with safer passage for travellers and an improvement in trade. During the lengthy construction John Pidgeon was the caretaker of the storehouse for the equipment used during the building, and he began selling refreshments to travellers who often waited for days until the weather improved to travel. As a smart businessman he also offered trips around the long wall which was one of the longest in the world when completed.

Business improved and Pidgeon (the ‘d’ in his name was dropped a long time ago) built a small hotel to cater for the needs of the growing number of travellers. In 1793, years after John Pidgeon had died, a new building was erected and operated for many years. This building still stands and lies in the shadow of the twin towers of the Poolbeg Station. Not long afterwards with the whiff of revolution in the air and the 1798 Rebellion a recent memory a fort was constructed near the hotel and it became known as the Pigeon House Fort. Today, the canon guns outside the entrance to the ESB power station were originally facing out to sea anticipating a possible French invasion that never came.

The place also made its literary mark on a young James Joyce. In his first great work Dubliners he tells of two boys playing truant (no doubt he was one of them!) as they went to the exotic building and the long wall that stretched seemingly forever into the bay in his short story An Encounter:

We arranged to go along the Wharf Road until we came to the ships, then to cross in the ferryboat and walk out to see the Pigeon House.