The Eyes Have It – A short story 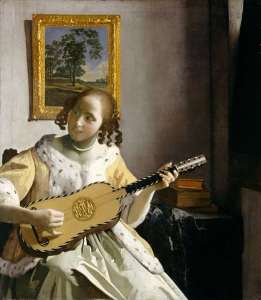 The gentle creaking of the old floorboards made me realise that I had crossed the threshold and entered the calm of the house. It was a bright morning in early May and tiny motes of dust floated in the shafts of sunlight that crossed the hall of Kenwood House in North London. The ticking of a tall grandfather clock was the only sound I heard as I looked around, taking in the paintings and beautiful quiet.

I went to the reception desk and enquired about the painting that I had come to see. The attendant directed me to a room at the back of the house, and I happily made my way along corridors filled with wonderful works of art. There were many paintings and pieces of sculpture, both big and small, and some fine furniture. No doubt all these pieces could tell a tale, but that would have to wait as I rounded a corner and stepped into the room that I had been directed to.

A few weeks earlier I had found out that a painting by one of my favourite artists, Johannes Vermeer, was on permanent display in the magnificent house on grounds that border Hampstead Heath. I had seen some of Vermeer’s work when I was in Amsterdam the previous winter, and was looking forward to seeing The Guitar Player.

And so I slowly looked about and found the beautiful painting only a few feet away, hanging near a tall window. The room was empty, save for me, the paintings and the gentle hum of a discreetly placed humidifier.

Although Vermeer produced less than forty attributed works, they are all prized and admired in equal measure for their clarity and brilliant capturing of a ‘moment in time’. It has been suggested, somewhat snootily, by some experts that he may have used a camera obscura to assist in the accurate rendering of his subjects and brilliant use of shadow. Whether this was true or not was far from my mind when I gazed upon the red-cheeked, young girl dressed in her gold and white dress, smiling as she plucked the strings of her guitar. It was a magical moment as I studied the colours, shadow and engaging smile that forced a grinning response. I was captivated and marvelled once again at Vermeer’s work. It was magnificent and I was delighted to have seen it.

I was aware of the silence in the room when I turned and looked at the other wonderful paintings. There was a delightful portrait by Franz Hals, and others by Gainsborough and Reynolds brought my eye to something that took my breath away. For there in front of me was a painting by another famous Dutch master that seemed to breathe and pulse, so intense and brilliant was the work. I was taken aback by the power of the sitter’s gaze, and it’s a moment that I have always treasured.

After the gentle, light work of Vermeer, I was completely unprepared for one of Rembrandt’s greatest works – Portrait of the Artist – that speaks with deep understanding over three hundred years after it was created. The artist is dressed for work and holds an easel and paintbrushes and has a bright, white hat to protect his long, silver hair. The painting is lit from the left and casts his left cheek and shoulder into shadow, a device that draws your attention to his face.

And his eyes – the windows to the soul.

They are the eyes of an old man, who was almost sixty years of age, and all too familiar with the ups and downs of life. For Rembrandt, who early on was successful, happy and rich, life dealt him some cruel blows. His wife, Saskia, who he loved madly, died young as did his son Titus. And, like other artists before and since, he made bad financial decisions and was eventually declared bankrupt. Such a fall from grace and the attendant pain are all captured in the painting that hung before me.

Then I realised something for the first time, and stepped closer. I could clearly see the brushstrokes and the dabs of paint that the master had applied all those years ago. And here I was in exactly the same position that Rembrandt must have stood, maybe on a morning in a far-off May, considering his next move. I felt that I was being let in on a secret and it was those deep, world-weary but captivating eyes that were my gateway to appreciating the master’s work. I have visited Kenwood House many times since, and always enjoyed Rembrandt’s gnarled, engaging face and the silent eyes that say so much.

Portrait of the Artist 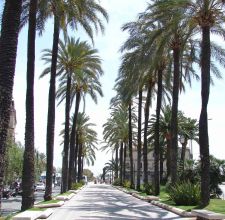 It was another hot day as Richard left the villa and stepped into the strong sunlight. It was about eleven o’clock and over on the north side of the harbour a queue was already forming for the boat trip around the island. It usually left at mid-day, or whenever the captain thought that enough tourists had shown up, and the weather, as it was today, was calm and just right for a cruise.

The warm air seemed to cover him like a new skin. It wasn’t just on his neck or legs, it was everywhere. The first few weeks had been uncomfortable, but after getting into a routine of rising early to begin his writing, Richard swam before breakfast and then relaxed. Later, he strolled into town and enjoyed the atmosphere of the Bar Cappuccino, with all its character and flavour of a true Spanish cantina. It was the sort of place, Richard decided, where Ernest Hemingway, the famous writer and lover of all things Spanish, would have been at ease. There he chatted in Spanish, badly at first, with customers and staff while some, especially Consuela, asked him to, ‘Help me Inglish, pleeze!’ He always tried to help her and was very happy to notice that his drinks began to arrive a little quicker than before, and the measures somehow seemed to get a little bigger too. Bueno!

He was spending some time in Port D’Andratx, Mallorca, in an attempt to finish a book he was writing. He had accepted the invitation from a friend to stay in the villa and ‘get your head together.’ The town, that only twenty years before was a small, sleepy fishing village, was now one of the most desirable holiday centers in the Mediterranean. Picture-postcard houses clung precariously to steep cliffs, and below yachts and fishing boats dotted the blue water. It was easy on the eye and no surprise to Richard that so many people had made it their home. If peace and quiet were what you were after then this indeed was the place to spend time in. The smell of seaweed from one of the colorfully painted sloops stung Richard’s nose and brought him back to reality – it was hot, again.

He strolled under the shops’ canopies and paused at the tobacconists before going inside to buy a packet of cigarillos. He liked the smell in the shop, which like all the other smells about the town seemed so intense and raw. Whether it was from the bakers, florists or fishmongers they were always interesting and made Richard grin.

‘Hola!’ greeted Consuela, as Richard sat at his favourite table. It was on the pavement near the front door and afforded him a full view of the harbour in all its bright and colorful glory. The sound of boats at anchor, bobbing gently on the clear waters, was broken only by the chat and laughter of passersby. A light breeze blew at Richard’s fringe which he flicked away casually before running his fingers through his thinning, fair hair. He ordered his usual drink, sat back and lit a cigarillo. Smoke slowly drifted across the well-stained table before drifting into the blue sky.

The heat and languor of the place dulled Richard’s senses and he soon began thinking about her. He didn’t want to, but she still intruded into his thoughts like a cold finger sticking into his side. It nagged at him and disrupted his ideas for the book, while all the time, deep down in the pit of his stomach, the ugly question of what happened to them needed to be dealt with – if only to end the pain – once and for all. He took a long, slow mouthful of beer and then a drag on his cigarillo before exhaling the bluish-grey smoke in a perfect ring.

Ten months and it still hurt.

How could he have known that she’d say no? They had dated for nearly two years and enjoyed holidays, weekends away and conversations late into the night, and it seemed obvious to Richard, that they had a future. But the, ‘I don’t think so, Richard!’ had stunned him. It was a like a kick in the teeth. He changed after that in a way that he wasn’t quite sure of, but he was definitely different.

Tears, countless tears had been shed, but when no clear answer arrived the pain lingered, slowly eroding his confidence. He discussed it with friends in the pub and over endless dinners but nothing seemed to make any sense. He lost weight and tried to occupy himself in senseless activities until his friend Dave said that he should ‘finish that damn book.’ It didn’t seem possible at the start, but after a few weeks of intense, numbing effort, he was on his way. There was now light at the end of the tunnel and he was beginning to enjoy the experience. Finally, he felt that he was heading in the right direction. The weight had started to slip from his shoulders, and for the first time in a long time, he actually felt like smiling.

Keep going, he reminded himself a thousand times a day, and each day he focused a little easier and with more conviction.

Richard was jolted out of his daydream and found himself looking directly into Consuela’s beautiful, big brown eyes. If ever a man got a pleasant surprise then this was it, he thought.

‘Gracias, mucho gracias,’ he answered with a smile. A warm feeling of anticipation crept up his spine, and he quivered with delight, as Consuela sashayed effortlessly between the tables before casting him a nonchalant glance over her shoulder. At the edge of the quay, tall palm fronds swayed lazily in the warm breeze. Richard blew another smoke ring, closed his eyes and was lost in the moment.

Marked Off – a year since the launch

It’s hard to believe but a year has passed since my book Marked Off was launched. It was a wonderful night in Hanna’s Book Shop in Rathmines and, thankfully, there have many good reviews in newspapers and literary websites since. And a few appearances on television and radio shows were really great fun. Anyway, thanks one and all for your support and encouragement, and here’s to an even better new year!

A few photographs from the Big Night!