Good review of my book Marked Off in the Irish Times today – many thanks. (Click image to read.)  🙂

John Henry Foley (usually referred to as JH Foley) was born on 24th May 1818 at 6 Montgomery Street, Dublin. It was better known as ‘The Monto’ the street at the centre of the city’s red-light district and called ‘Nighttown’ in Joyce’s Ulysses. It was made famous by the  Dubliners when they sang George Desmond Hodnett’s song Monto (Take Her Up To Monto). It was subsequently renamed in honour of Foley’s work as the pre-eminent sculptor of his time.

The young Foley had plenty of artistic influence around him as his father Jesse, who came from Winchester, was a glass-blower and his step grandfather Benjamin Schrowder was a sculptor. His older brother, Edward, showed him the way as he had taken up a career in sculptor, and JH entered the Royal Dublin Society (RDS) in 1831. He was an ardent student and before long won a number of prizes and recognition, and left to join his brother in London three years later. He studied at the prestigious Royal Academy from 1835, and he exhibited his first piece there in 1839. In 1844 his sculpture Youth at a Stream won him fame and a steady line of commissions that remained for the rest of his life.

As he was based in London his studio was always busy and he won some very favourable commissions that included sculptures for the Mansion House; and one of the four stone groups on the Albert Memorial in Kensington Gardens. Afterwards he was asked to make the bronze statue of the price that was the centre-piece of the memorial. His sculptures of military men, and most noticeably his carving of their horses is considered exceptional.

In Dublin his most prominent works are those of Daniel O’Connell on O’Connell St, and Edmund Burke, Oliver Goldsmith and Henry Grattan on College Green. A number of his statues, however, were considered ‘hostile’ to the newly emerging Ireland in the 1920s and they were either damaged or removed. Although this happened many years after his death, the mark he did leave upon his native city is considerable and much appreciated.

He died on 27th August 1874, was buried in St Paul’s Cathedral and left all his models to the RDS. 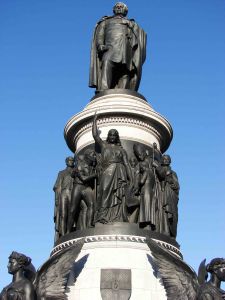 Cool piece in Crime Fiction Ireland about Marked Off – thank you very much!!

There are few originals, but Harry Clarke most certainly was one of that rare breed. He was the third child of Henry Clarke (decorator from Leeds) who arrived in Dublin in 1877 and his wife, Brigid, and was born on St Patrick’s Day 1889.

He attended Model School (Marlborough Street) before going to nearby Belvedere College. After leaving in 1905 he took up an apprenticeship in his father’s studio, that by now had added a stained-glass section. Work was tough and his skills were soon noted in the Dublin Art School where he went to evening classes. In 1910 he work was recognised countrywide for the first time when his The Consecration of St. Mel, Bishop of Longford, by St Patrick won the gold medal for stained-glass work in the Board of Education National Competition.

Shortly afterwards he went to London and where he worked as a book illustrator for the publisher Harrap & Co. Here he was able to transfer his skill of working in glass and his first printed work was Fairy Tales by Hans Christian Andersen’s. Next was a set of illustrations of Edgar Allan Poe’s Tales of Mystery and Imagination, a work so brilliantly done that Clarke’s reputation as an illustrator was assured.

When his father died in 1921, Harry and his brother Walter took over the studio at 6 North Frederick Street, and produced more than  160 stained-glass windows for both commercial and religious commissions. His work suffuses strong, bright colours and the brilliant drawing of elongated, expressive figures is breathtaking, especially when backlit by strong sunshine. The use of such colour was     something that he loved having been influenced by the great stained-glass windows at Chartres Cathedral.  Some of his work that is seen by thousands, on a daily basis, are his windows on the ground-floor in Bewleys Café on Grafton Street. Also, his pieces in the Hugh Lane Gallery are real favourites. As his fame grew he received commissions from England, America and Australia and he worked tirelessly in the smoky studio.

Clarke suffered with lung problems all his life so the studio environment was bad for him. He continued and was finally diagnosed with tuberculosis in 1929. While returning to Dublin from a sanatorium in Davos, Clarke died in Chur (Switzerland) on 6th January 1931, where he is buried. He was only 41. 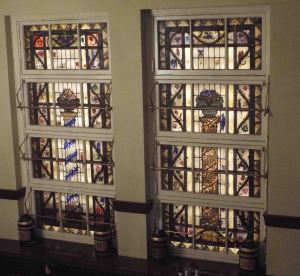 One of the most attractive Liffey bridges, the single span Rory O’More that connects Ellis Street from the north quays to Watling Street on the south quays, has had an interesting history.
A wooden bridge was erected on site in 1670 to the great displeasure of certain vested interests. They wanted people to continue using the ferries that crossed the river, thus maintaining their influence and income. After an attack by hired thugs in 1671 a fight on the bridge with soldiers led to four fatalities and the bridge was soon known as Bloody Bridge.
A new four-arch stone bridge replaced the old bridge around 1700 and this became known a Barrack Bridge as it was the main route for soldiers travelling from Dublin Castle to the new barracks on the north side of the Liffey (now Collins Barracks).
Construction of the current bridge began in 1858 and after many delays the work was completed under the guidance of John Killen in 1861 at a cost of £11,000 – much more expensive than originally estimated! After Queen Victoria and Prince Albert arrived in Dublin they made their way along the quays and crossed the new bridge on 30th August 1861. From then on the bridge was called The Victoria & Albert Bridge.
As part of the 100th anniversary of Catholic Emancipation in 1929 when Benediction was celebrated on the bridge it then became known as Emancipation Bridge.

Finally, in 1939 the bridge was renamed Rory O’More Bridge in honour of the leader of the failed rebellion in 1641. He and his men had planned to seize Dublin Castle on October 23rd, but a traitor revealed the plan to the authorities. O’More managed to escape capture and made his way up north to continue the fight. However, when Oliver Cromwell and his 10,000 troops arrived in 1649, the final traces of revolt were brutally swept away.

There is a first time for everything and yesterday I did my first radio interview. I was invited by Jacinta Matthews, host of Creative Flow on Dundalk FM, to appear on the show and we were joined by Roisin and Elaine, two members of a local book club. (Click to listen.)

We discussed my book Marked Off and writing in general.  I must say that it was a memorable and very enjoyable experience. Thank you to all concerned.

Books Ireland – Review of Marked Off

Great review of Marked Off  in Books Ireland Magazine (May/June 2015 issue) by Sue Leonard in the ‘Debuts’ section. (Click image to read.)